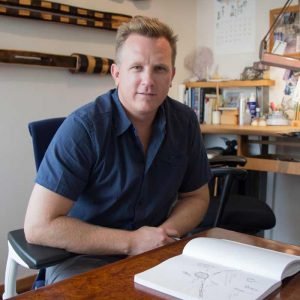 Shaesby Scott’s inspiration is rooted in art and sculpture. He was exposed to the world of fine art by his mother, a prolific painter and printmaker. Shaesby’s appreciation of art led to a fine arts degree in sculpture and an early endeavor designing furniture and sculpture. He opened his first studio while in college. It was then that he began his career manipulating metal. While living abroad in Rio de Janeiro, Shaesby discovered his passion for jewelry. He embraced the Brazilian custom of adorning the body with art. For Shaesby, jewelry design is a natural artistic process, making each piece a unique, wearable piece of art. Vibrantly colored Brazilian gemstones and highly expressive styles continue to influence Shaesby’s work. In an effort to relate his work closely to nature, Shaesby spends much of his time traveling and exploring the world. “One of my design principles is to distill what is found in nature into a wearable, comfortable piece of jewelry. My work does not truly come to life until worn.” Today, Shaesby produces sophisticated collections that fuse art with fashion. Each collection moves easily from day into night from one season to the next. Shaesby’s unique sensibility is widely appreciated for being both highly fashionable and casually elegant.