Get to know our artists: Roule & Co Q&A

Christopher Roule and Laurin Lucaire, husband and wife design team behind Roule & Co, have been pushing the boundaries of fine jewelry for almost a decade. With a streamlined simplicity, their trademark wireform metalwork lends luxury to the precision of geometry and the three-dimensionality of architecture. Creators at heart, the two began designing jewelry together years before their joint collections came to be. We were fortunate enough to catch up with them all the way from their NYC studio. 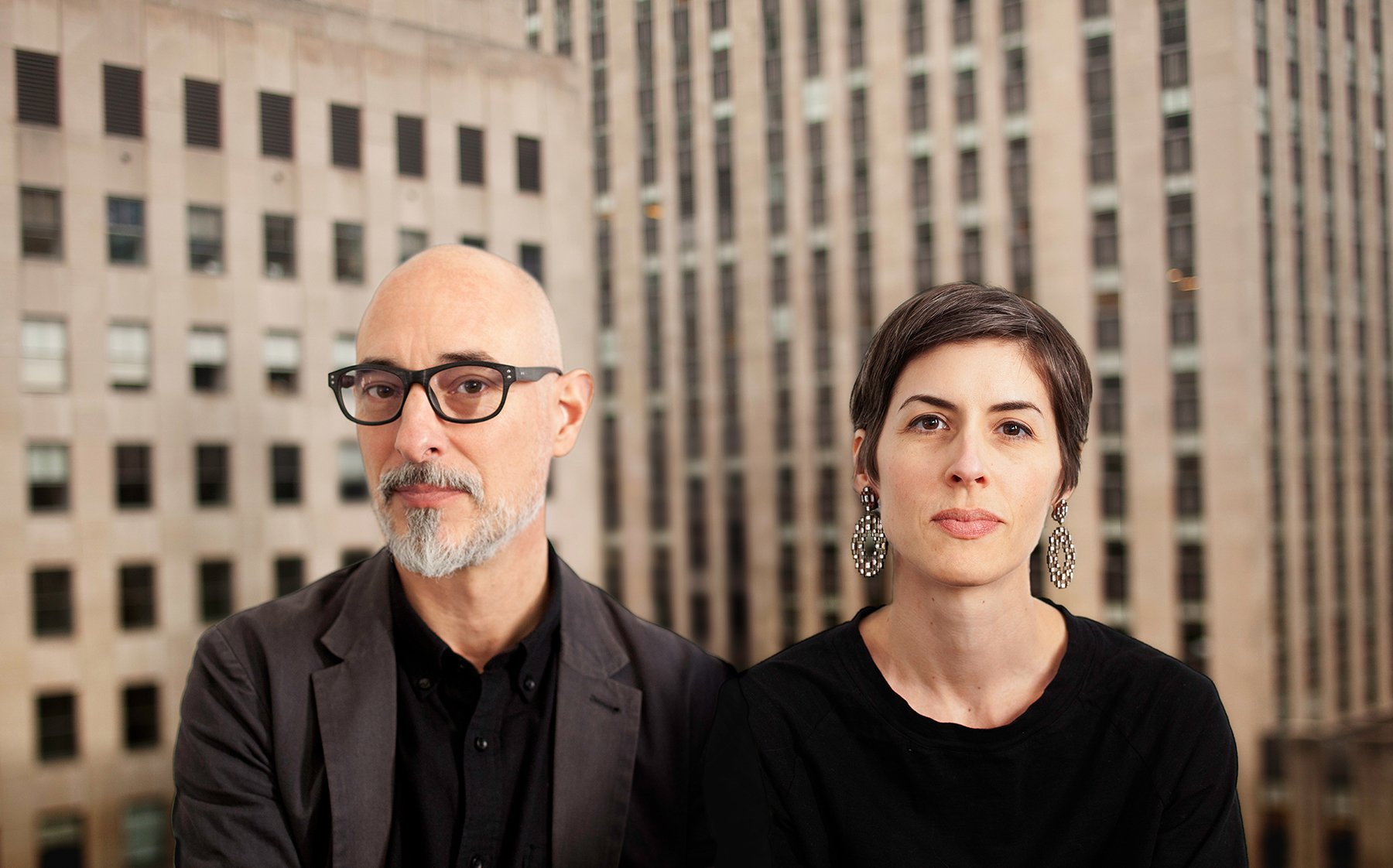 We are so captivated by your innovative, iconic jewelry. We’ve never seen anything like it! Can you tell us a little about what drew you to jewelry design and how you got your start?

Christopher: Thank you for saying that! Laurin and I strive to make pieces that communicate our passion for design, but of course it’s a process, ever-evolving. We love to experiment, and occasionally something works! It’s taken many years and a ton of trial and error, and we still have much to learn and experience as designers.

I think part of what drew me to jewelry as an art form is its intimacy—between maker and wearer or giver and receiver, sometimes never taken off, often passed down for generations. People project so much emotion onto the pieces they wear: strength, glamour, nostalgia. It’s a form of identity, armor. 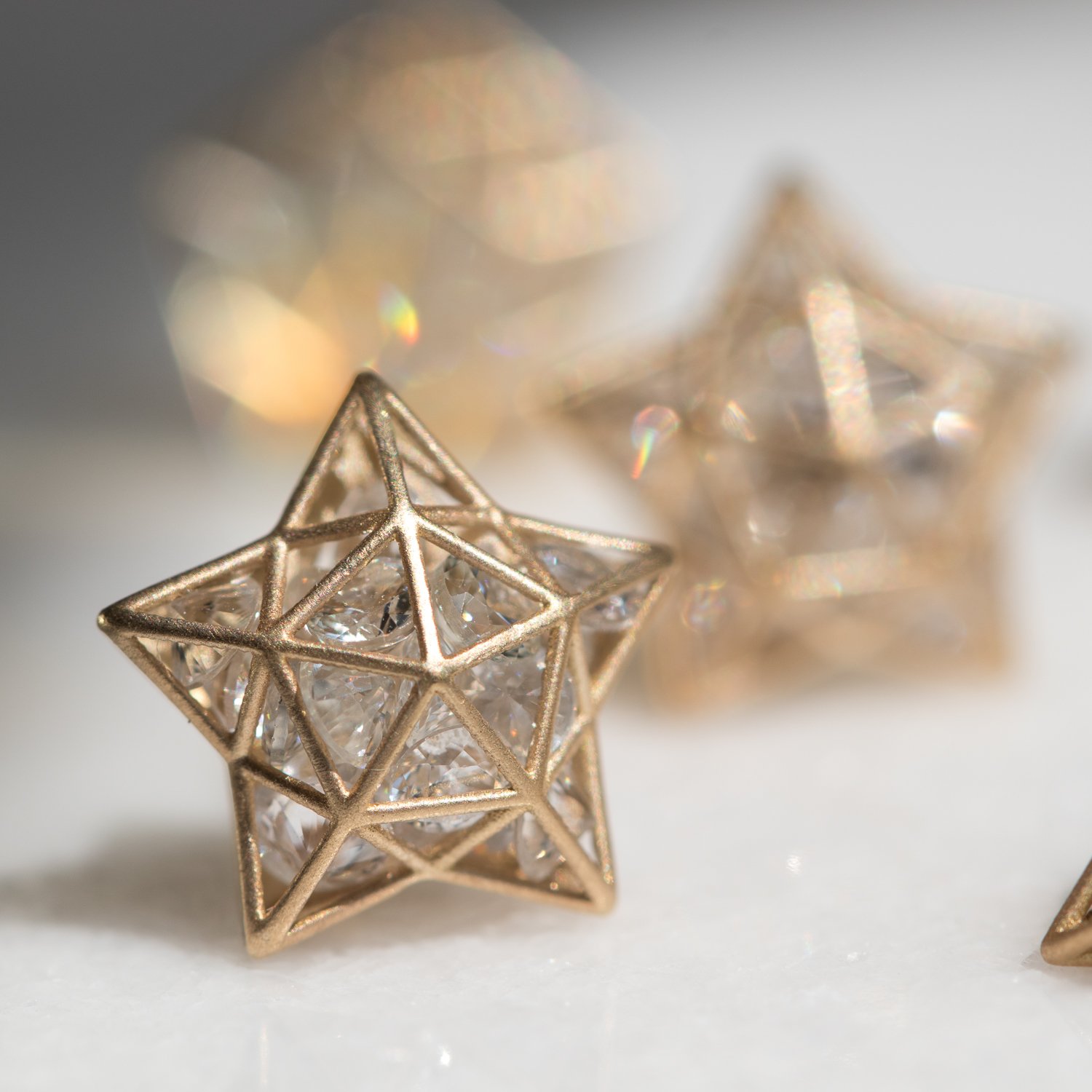 For me, two influential childhood memories stand out: one, the day my mother showed me pieces of jewelry that belonged to her parents, who both passed away when she was young, in Northern England. She had very few things of theirs, and to her they were invaluable treasure. Their story traveled to us, across the ocean, into the future, with those little pieces of gold. Now my mother is gone, so their sentimental value has grown exponentially. The second was a summer spent outside Pittsburgh with my paternal grandfather, who worked in a steel mill. Visiting the factory, I found the process totally captivating: raw elements transformed into the building blocks of bridges, skyscrapers … It was pure alchemy!

I think that’s what initially drew me to benchwork: to capture, in metal, the emotion of those experiences. I’ve been making jewelry in various incarnations ever since.

Laurin: Christopher and I have known one another seemingly forever. We connected when he first started making jewelry — I bought a few pieces, we became friends, then dated, then married, then formed Roule & Co. What was the question again? LOL We’d always been simpatico creatively, bouncing ideas off each other, and at some point we decided to make the collaboration official. I don’t think I would have entered the world of jewelry design without Christopher, and I still consider myself a bit of an outsider, but in a good way. It allows me to indulge a certain irreverence that I find exciting. 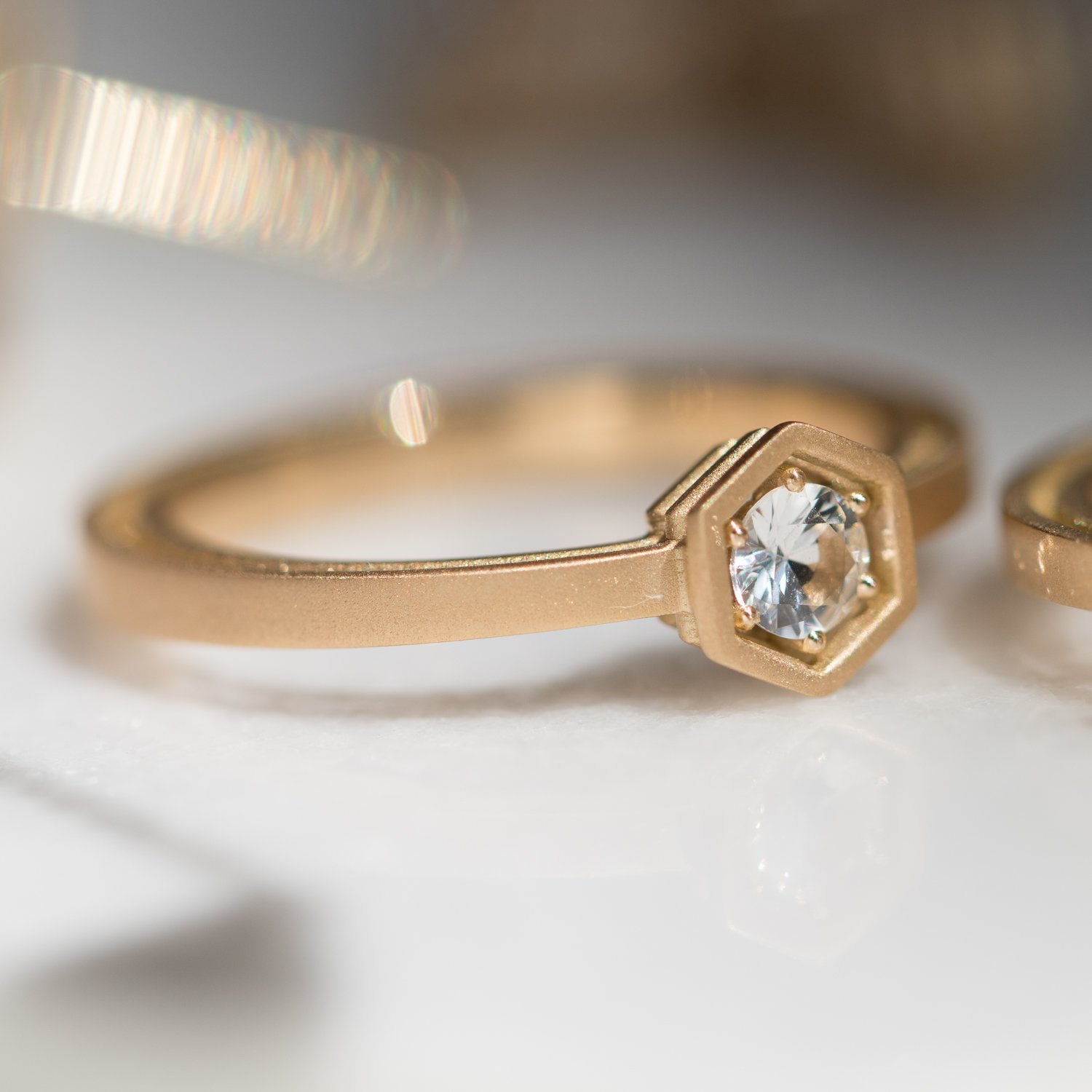 What was the first piece of jewelry you ever made?

Christopher: I was about twelve and it was for my mother, a wild flower tied to a string. Let’s just say it was an ephemeral design!

Laurin: I grew up making things—drawing, painting, sculpting, sewing, weaving, you name it. There was a lot of playing with color and pattern. But my first metal jewelry was probably made in an enameling class I took as a teenager—I loved the combination of happy intentions and happy accidents.

What’s your favorite stone? What material(s) do you like to work with most?

Laurin: Sapphires, garnets, spinels—the in-between, hard-to-describe colors especially. Beyond the adornment aspect, jewelry does have a sort of primal power that can be hypnotizing, harnessing the earth’s elements and presenting them in various forms of rawness or refinement. Metal has memory, stones have light and magic. Sometimes it feels like we are all just magpies, collecting our sparkly things.

Christopher: She is DEFINITELY a magpie, I just build the nests to hold everything! I am drawn like a pirate to certain gems—neon Mogok spinel, blue-green Indicolte tourmaline or battleship grey moonstone for instance—but really am more of a metal person. I love alloys and finishes and patinas, so other than the metalwork, I like to just let the gems do their thing. 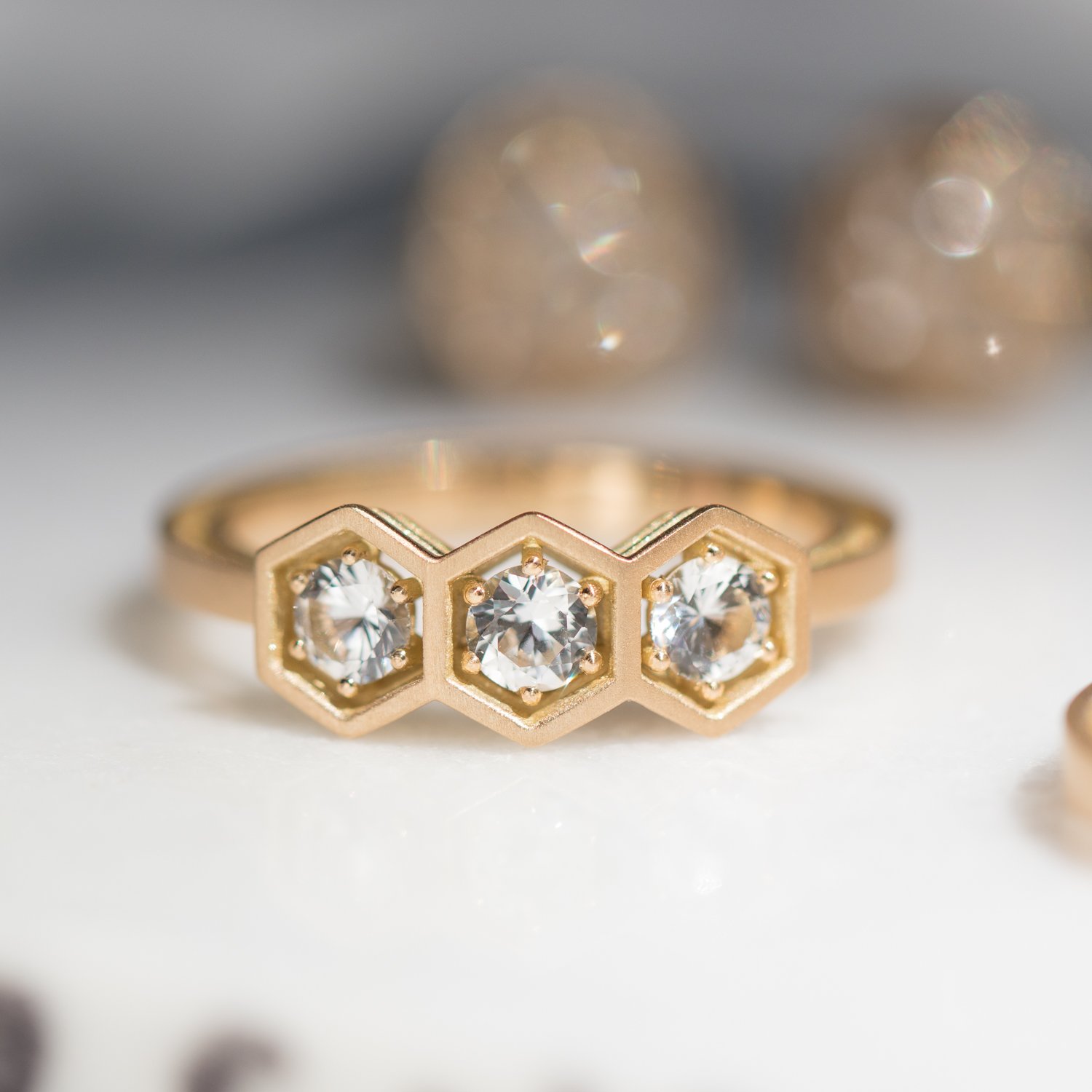 How does the dynamic of being husband and wife influence your work?

Laurin: A lot of back and forth! We both design, though some pieces end up more of one of us than the other. Christopher and I are very similar in some ways and very different in others, so we have a balanced dynamic—each alternating between supporter and critic, but always with affection. It’s pretty awesome. The best and worst part is we’re always working!

Christopher: What she said. I’m working … 🙂

The jewelry is made in NYC—can you talk a little bit about what the city brings to the collection?

Laurin: I grew up in New York City so am very much at home here. It’s not perfect—and every New Yorker retains the right to complain about it constantly!—but like all great American cities, it is a continuum of those who came before you and those who will come after you, where it feels like the world is at your fingertips and great things can happen. A buzzing human hive. In terms of the collection, we’re so happy to make our jewelry here and to do our little part to keep the local industry going.

Christopher: I was born and raised in coastal Connecticut. I spent a lot of time in nature as a child, walking the marshes, beaches, and woods, but I’ve lived in NYC since I was in my twenties. I hope to find inspiration wherever I am—and this city delivers!—but I don’t think I could appreciate all it has offer if I didn’t escape on a regular basis. I have to unplug, reset.

We work from Rockefeller Center, a true New York City landmark which was a feat of industry and architecture in its time. Our studio has a long bank of windows overlooking 30 Rock so we stare at it all day. But looking beyond the buildings themselves, which now seem almost quaint, I see pattern and texture: warm hues of time-worn limestone, glimmers of sky and clouds reflected in the glass delineating the facades, a towering verticality. It’s especially transporting at night! This city of skyscrapers has definitely lent much inspiration to our collection. 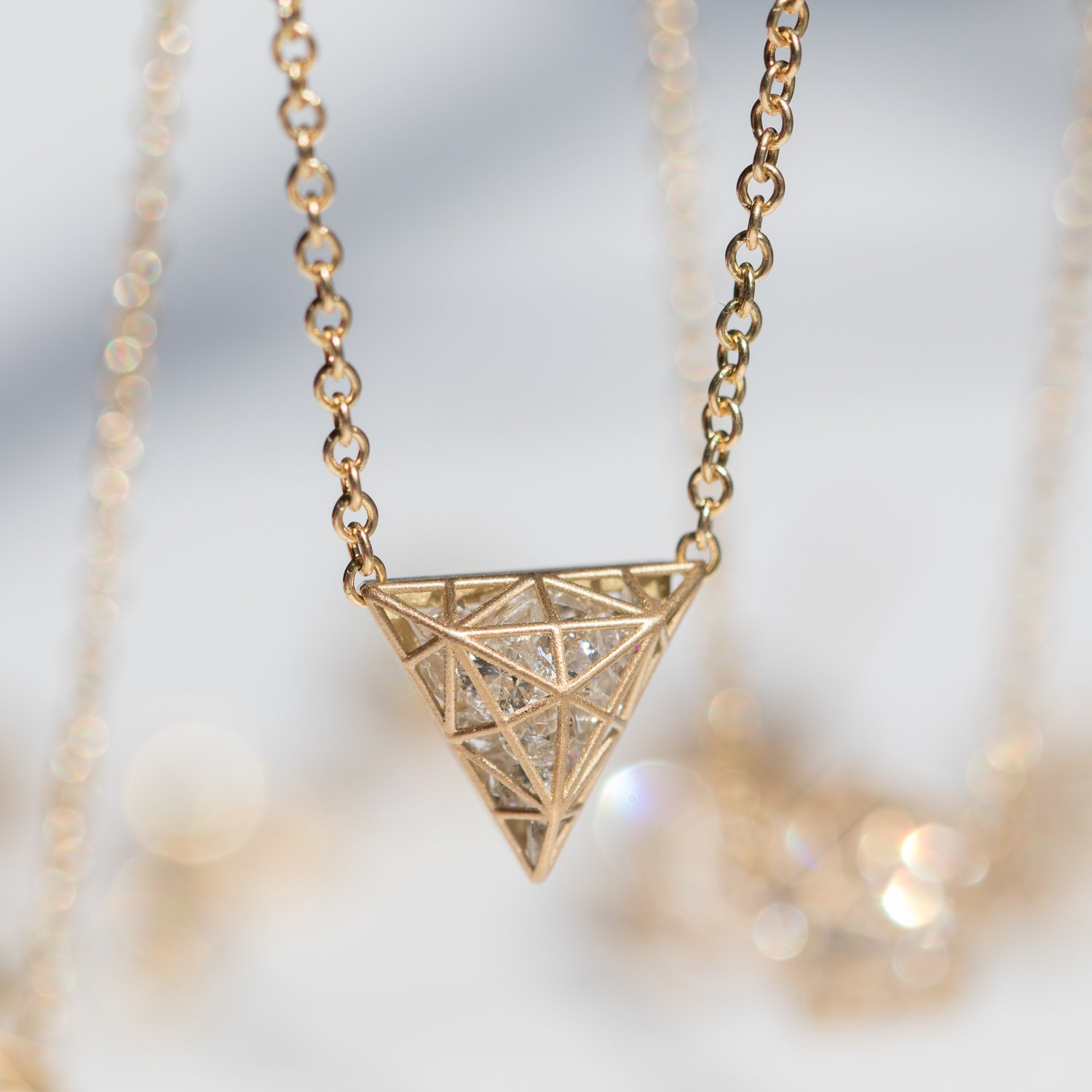 Do you have a style icon?

Christopher: Dub poet Linton Kwesi Johnson. My older brothers introduced me to dub and reggae when I was around fourteen. I was immediately hooked on the sound, accompanied by some serious style.

Laurin: Probably a combination of rocker chick and French gamine.

Most adventurous thing that you’ve done?

Laurin: As a college junior, traveling solo thru Italy. Having spent years studying art it was thrilling to see things in person that I had previously only seen in books, and to have those experiences all by myself. And of course Italy itself is a living, breathing work of art.

Christopher: Getting married, the adventure that keeps on giving. 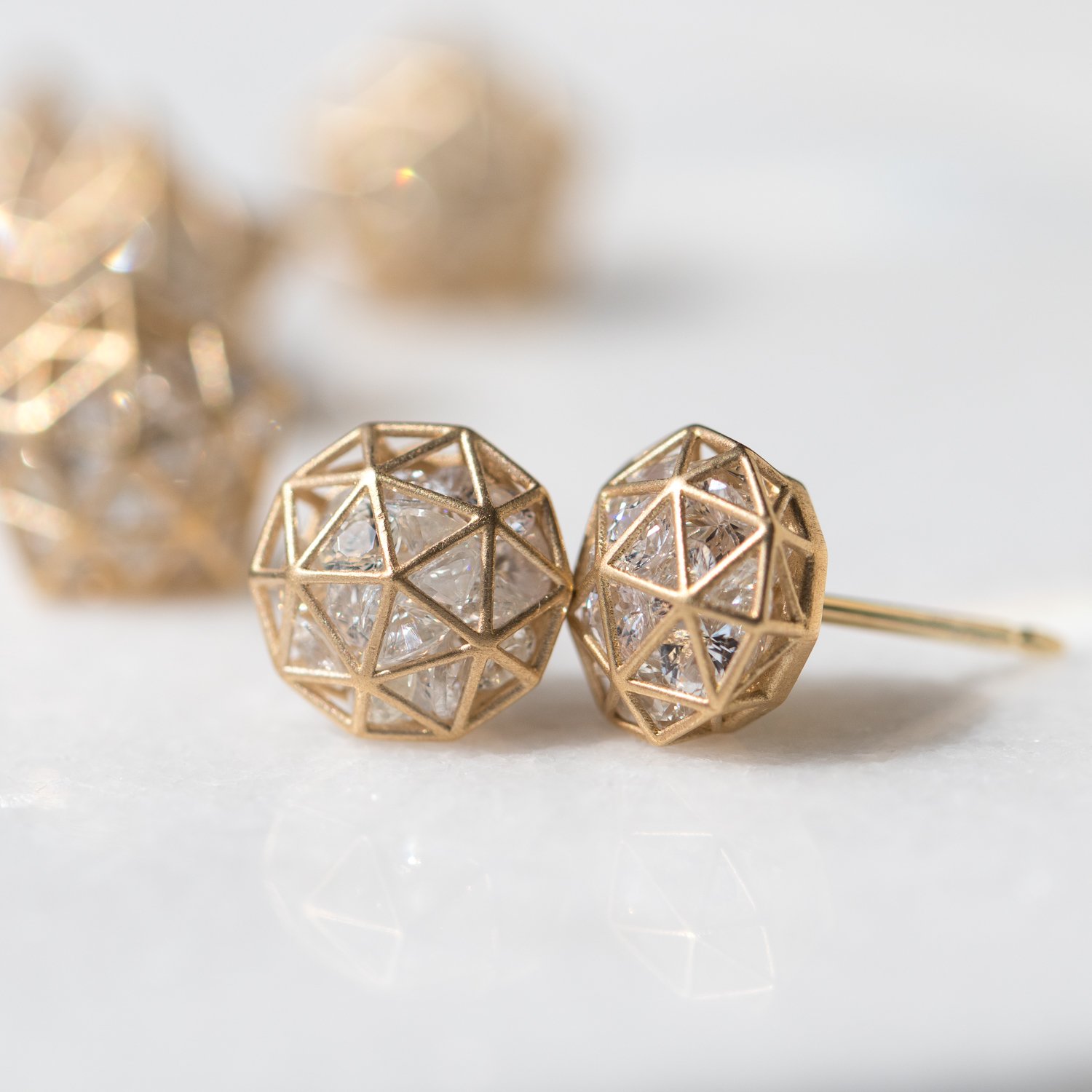 Laurin: Since rosé season is (sadly) over, probably chinotto.

Laurin: Orange blossoms—a smell that makes me instantly happy—and dried eucalyptus. Both remind me of summers at my grandparents’ house down south.

Christopher: Seawater, but the scent I wear every day is Comme des Garçons Odeur 53. Who can resist notes of burnt rubber, flash of metal, mineral carbon? 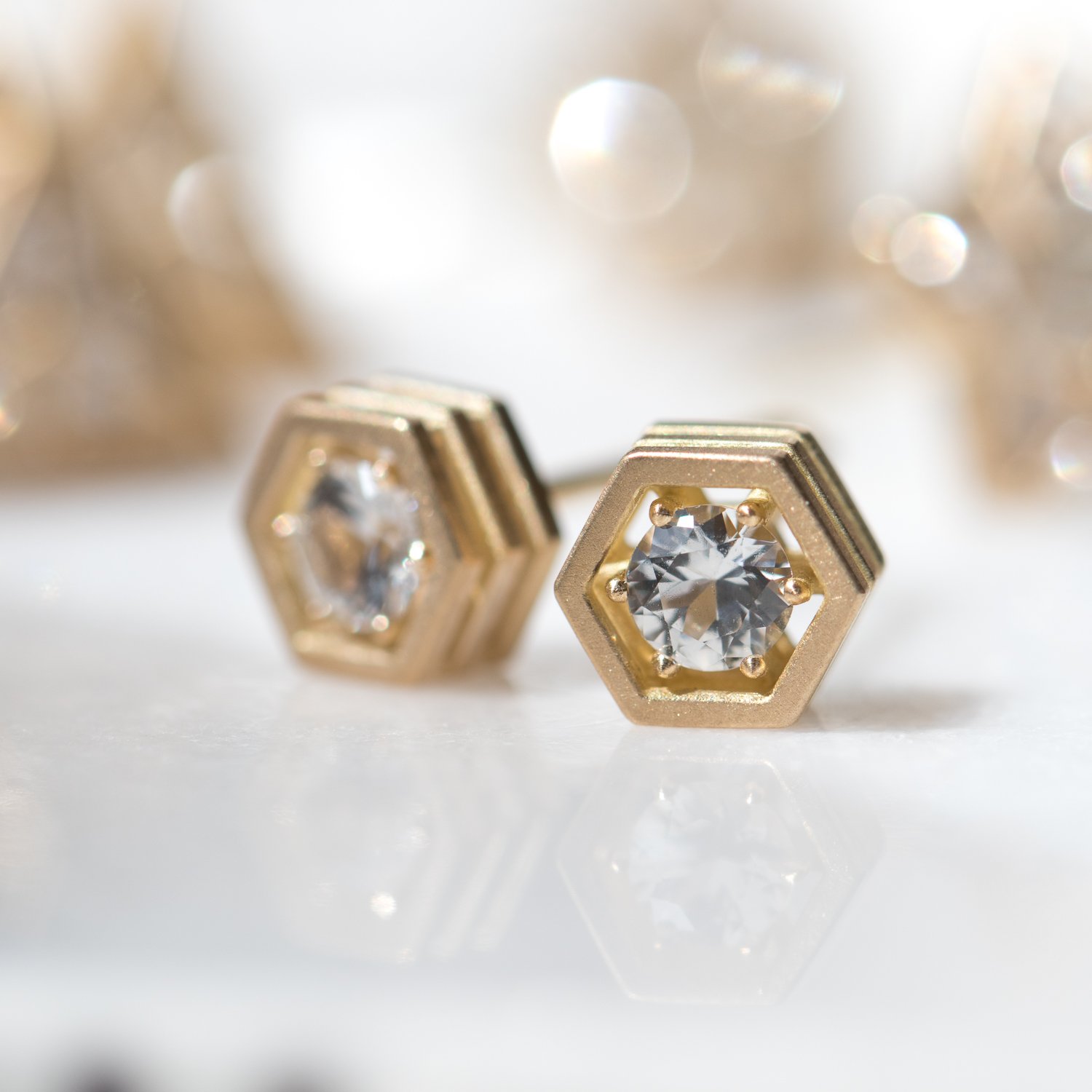 Laurin: Blade Runner; to me a perfect combination of style and substance. I love sci-fi noir—a future that is technologically advanced but with grit and grime and the same old sins and struggles. The movie is also rife with a sort of retrofuturism that we love to embrace design-wise, too—ziggurats and neon and cyborgs. (And of course Harrison Ford in his prime.)

Christopher: Stalker by Andrei Tarkovsky. A slow, starkly beautiful film about memory, the mind, the soul.

Laurin: It’s impossible to pick just one, but standouts are photographer Hiroshi Sugimoto, painter Vija Celmins, Ed Ruscha, James Turrell, Olafur Eliasson, Andy Goldsworthy. But art is everywhere—right now there is an empty lot near our studio that a homeless man covers in chalk graffiti. He’s got something, and I often go out of my way to see what he’s been up to.

Christopher: On this topic Laurin and I totally agree. 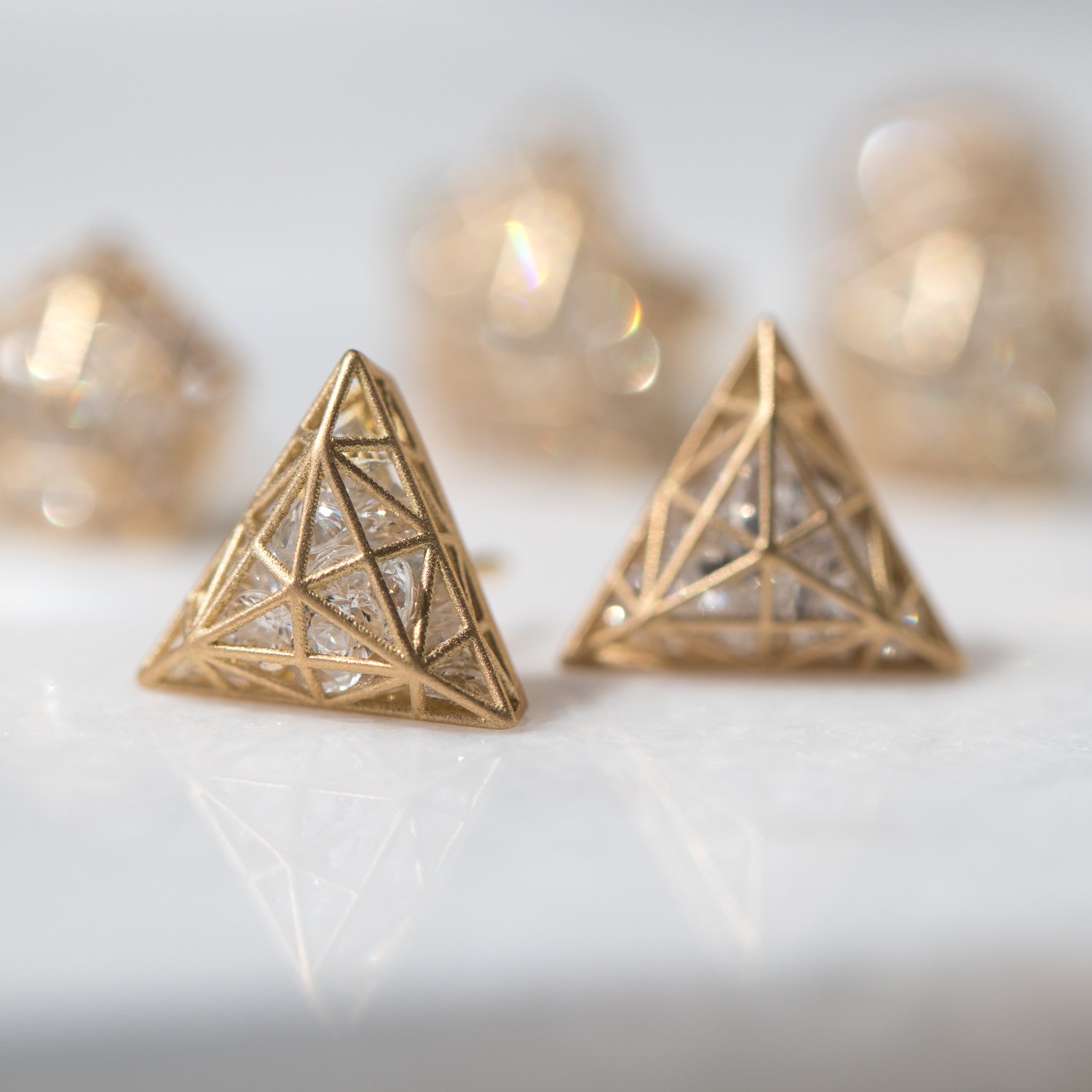 What are you listening to right now? What music do you usually have on at the studio?

Laurin: Christopher and I are both a little religious about music, so we almost always have something on. At the studio it might be Cocteau Twins, Brian Eno, M83, synthwave… Right now The Clash is sounding really great.

Christopher: Music is my lifeblood: I drink it through my ears directly into my being. When we’re working, Laurin is usually the DJ, but left to my own devices, I’ll play David Bowie, Bob Marley, T-Rex, Gregory Isaacs, Leonard Cohen, or something embarrassing from the 80s.

Laurin: Both! For coffee right now it’s an organic French roast Ethiopian that we make via stovetop espresso maker in the morning; for tea, usually in the afternoon, either white or green (King of Golden Needles, Jasmine Downy Pearls). We’ve also gotten into matcha recently and love the almost savory quality, and the ceremony of it.

Laurin: Get lost in nature or turn the music up. 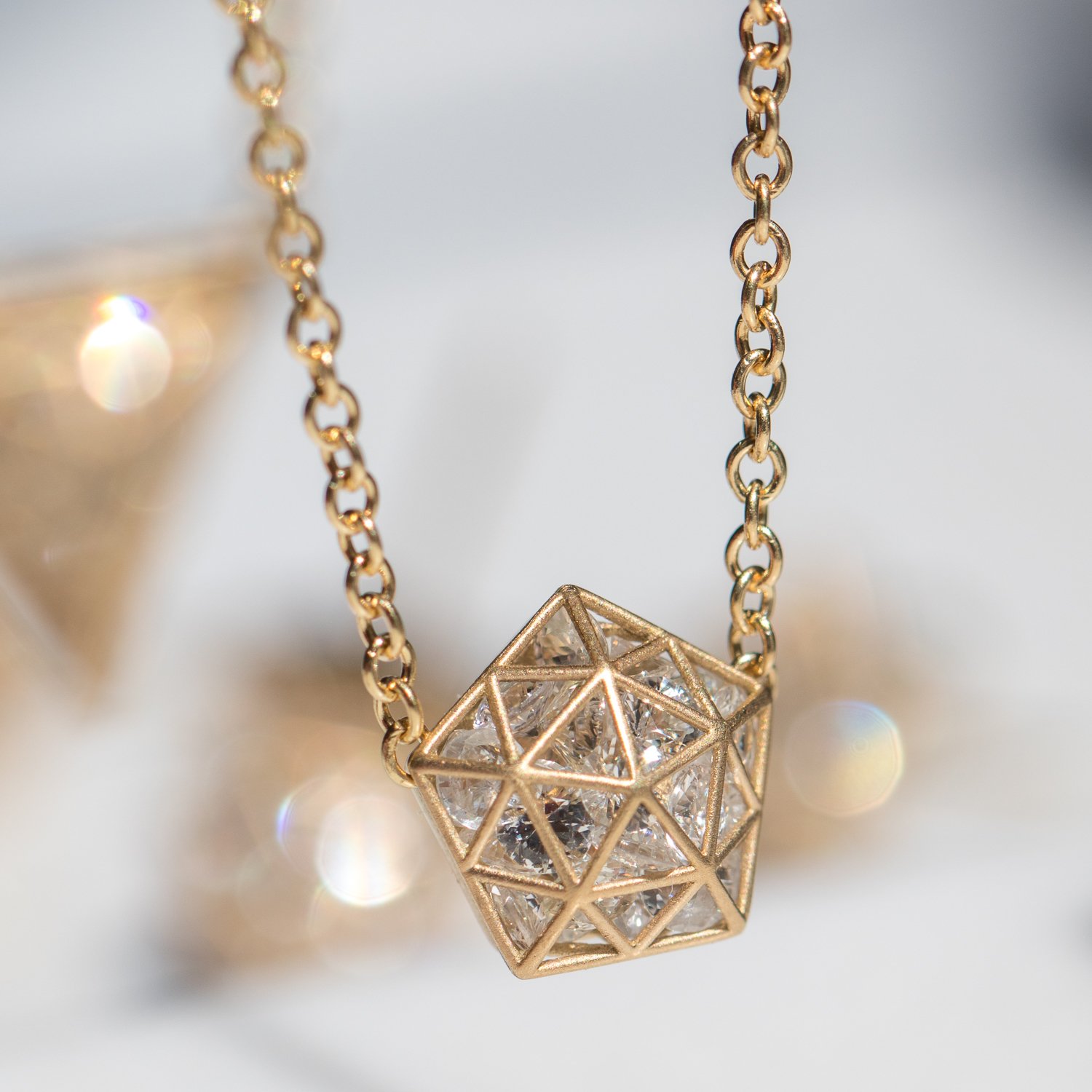 Christopher: The odds are very high that it involved our cats!

Laurin: Yes, probably a pic of our longhaired fur babies: Ivan, the elderly gentleman in a tuxedo, and Orson, the handsome whippersnapper. They are both totally fluffy and adorable and keep us sane.

Who do you most admire?

Christopher: Those with open eyes and minds.

Christopher: The wedding ring I made for Laurin, using one of those few very special heirlooms of my mother’s that I mentioned earlier: an engraved octagonal band of peachy 22k gold that spins between two rose gold side bands set with the tiniest little natural pale pink diamonds. We’re all together now in that ring, us and all our memories.

Laurin: I have a lovely collection slash archive of jewelry Christopher has given me over the years, including my wedding ring, and a piece we haven’t made yet, using an imperial topaz (my birthstone) he presented to me about ten years ago. 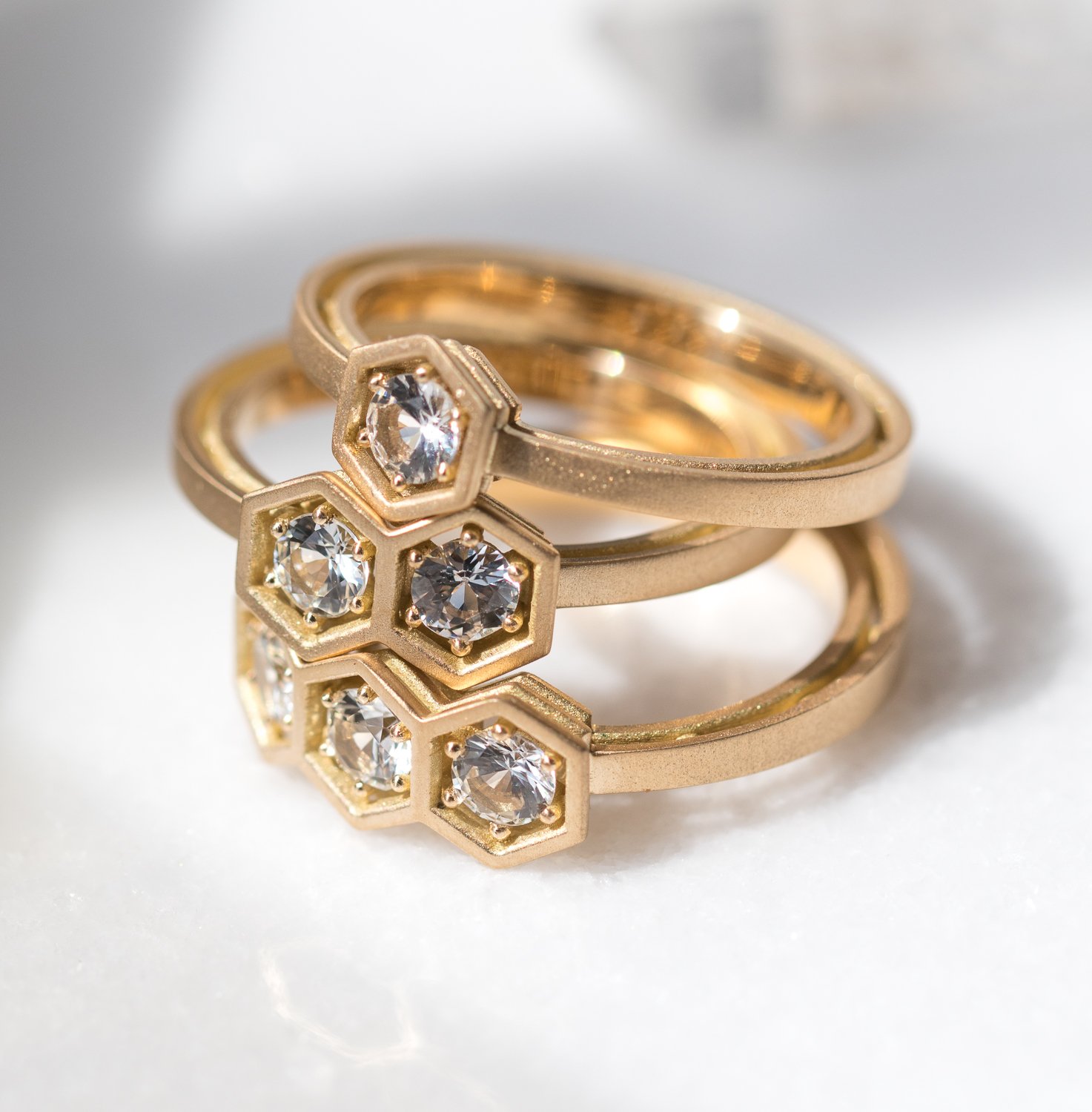 Favorite accessory you cannot leave your home without?

Laurin: I am an obsessive collector of pens and journals so my bag is usually weighed down with a selection. Right now I’m grooving on a Tachikawa manga pen that’s sort of a techy fountain pen, and a minimalist little “naked white” open-flat journal by Mishmash.

Christopher: A stainless steel vintage Montblanc ballpoint my father gave me when I stepped off the plane after my first solo international adventure as a teenager. I got myself into all sorts of trouble, so I think he was happy I returned home at all! I use it to write and sketch to this day.

Best thing that happened to you this year?

Christopher: A fleeting moment of mental clarity, like the beginning or the end of something. The feeling has stayed with me since, like a window into life in slow motion. Hopefully I don’t need to see a neurologist!

Laurin: We saw My Bloody Valentine, my favorite band, live. Their shows are notoriously loud, but once you get over the physical discomfort there is staggering beauty in the noise. It’s a psychedelic experience.

What are you looking forward to?

Laurin: A world where everyone can be themselves and anything is possible. Less hate, more love. 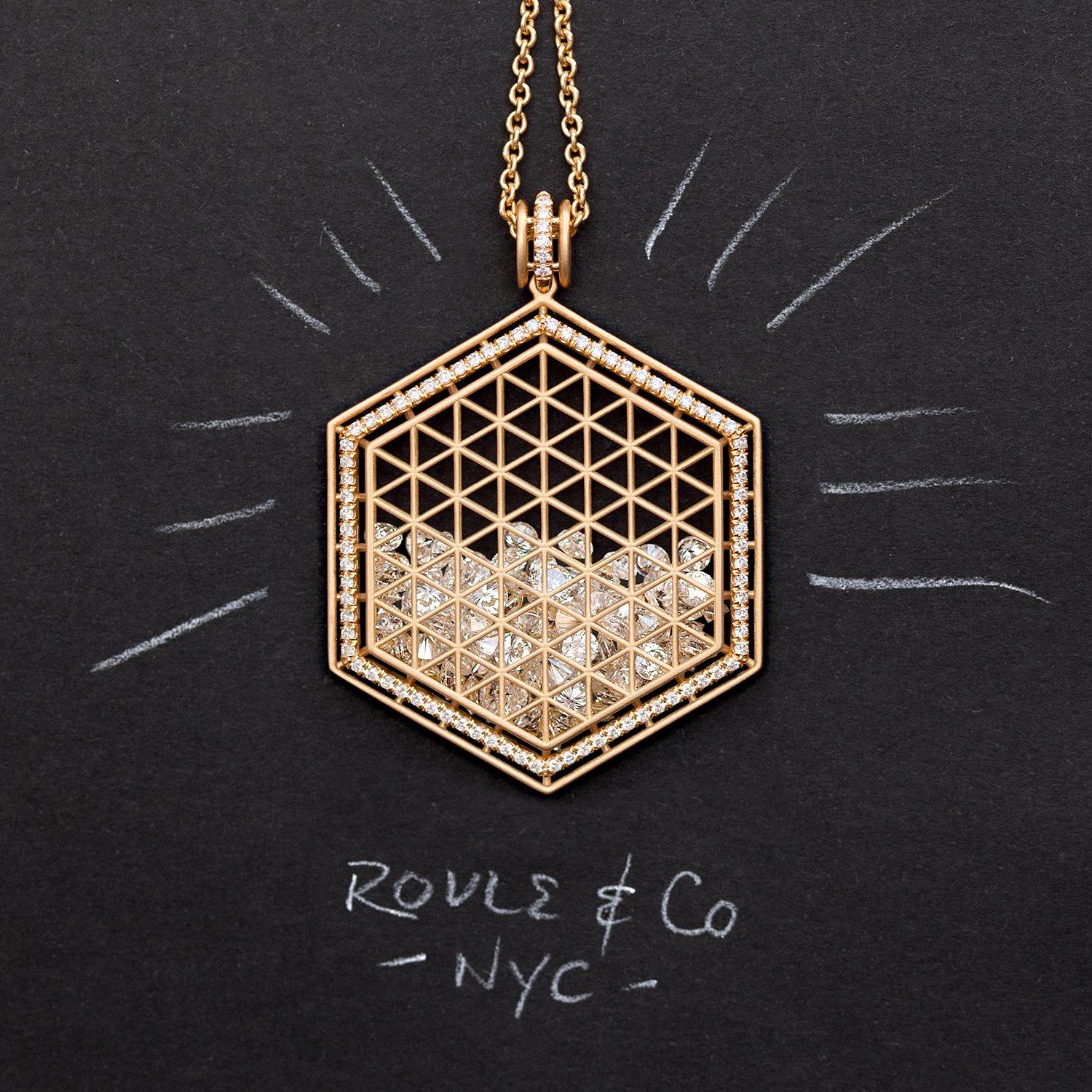 See all in Jewelry, Q&A, We Love Our Artists

We’d love to see how you wear our jewelry…post a photo on Instagram and tag us @newtwiststore! You’ll be entered… 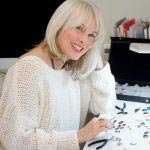 GET TO KNOW OUR ARTISTS: Victoria Cunningham Q&A

Victoria Cunningham‘s exquisite fine jewelry, which range from simple diamond pendants and stacking rings to dramatic one-of-a-kind pieces, have been… 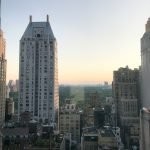 From NYC, with Love

We recently returned from our biannual buying trip to NYC. There we visited three different gift shows, NY NOW, Melee,…